University of Phoenix Stadium is a football stadium in Glendale, Arizona. Its primary tenant is the Arizona Cardinals of the NFL. The new stadium is located across the street from the Jobing.com Arena. The University of Phoenix, a for-profit university specializing in adult education, acquired the naming rights in September 2006, shortly after the stadium had opened under the name Cardinals Stadium. The 63,500-seat stadium (expandable to 72,800) opened on August 12, 2006 when the Cardinals defeated the Pittsburgh Steelers, 21-13, in a preseason game. The first regular season game was played September 10 against the San Francisco 49ers (the Cardinals won 34-27). This was the first time the Cardinals played on the opening weekend of the NFL season at home since moving to Arizona in 1988. The stadium will also be home to the annual Fiesta Bowl and, once every four years, the BCS National Championship Game. In 2008, the stadium will host Super Bowl XLII. It will host Mexico @ United States in a friendly soccer match on February 7, 2007. It will additionally host the Fiesta Bowl National Band Championship High School Marching Band competition, and the first marching band to ever play on the field was Foothill High School, from Pleasanton, California on December 29, 2006. It will also be the site for the West Regional Finals of the 2009 NCAA Men's Division I Basketball Tournament. The ceremonial groundbreaking for the new stadium was held on April 12, 2003. The estimated cost of the project is $455 million. The $455 million includes the cost of acquiring the land, constructing the stadium and $41.7 million for site improvements planned directly outside the venue. The Arizona Cardinals will contribute at least $147 million, and the Arizona Sports and Tourism Authority will spend more than $298 million. Glendale, where the stadium is located, will put in $9.5 million. The facility features a first-of-its kind retractable roof that is 206 feet (63 m) above grade, with a cabl 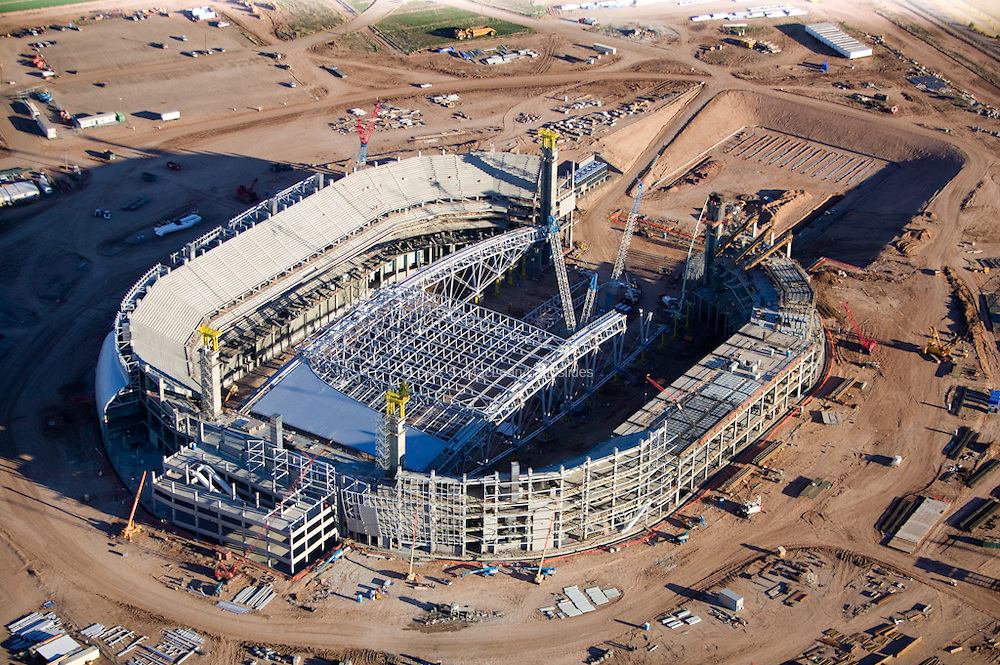